A quick meal in Da Nang

We stayed in Da Nang for a day before our flight to Saigon; we would have stayed longer but Da Nang did not seem to have much in the way of tourist areas or any special regional dishes. I am sure we were mistaken on both points but when you are changing flights you have to make your decisions quickly; plus it was raining (yuck). 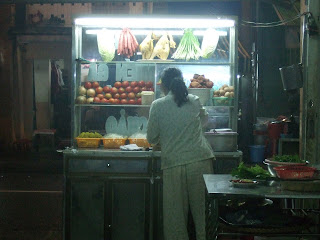 So on to the meal, we selected a place based on our usual criteria, a small hole in the wall restaurant that was serving what we like.   The place we selected had a few dishes and the whole kitchen consisted of what you see in the picture. No refrigeration or wash station, just good food prepared by a skilled cook.

Again we would never store our ingredients in this manner as we would never chance it as North Americans are not use to this method of cocking. I paid for my adventures several times over the course of stay in Asia.  It was worth the risk but it did make me a friend of the pharmacist. 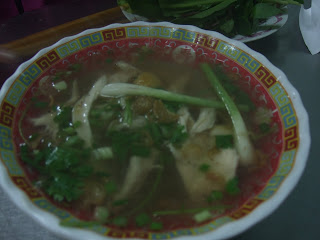 We had two dishes, first a bowl of chicken Pho. It was a nice soup with a tasty broth and good meat but nothing different than any of the other chicken soups we have encountered as yet. It was exactly what it was suppose to be, a hot bowl of home made chicken Pho, comfort food for the common person. 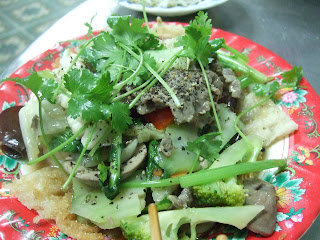 Next up was a beef stir fry on a very interesting deep fried noodle. The stir fry on top was good but it was the noodle that was really special. The rice noodle had been flattened and deep fried before being topped by the stir fry giving it a unique taste and texture. It was crunchy were the sauce had missed and the softened noodle still had the extra flavour that the deep frying imparted to noodle. I know that the oil was probably not the healthiest but it was tasty.

Filed Under: Food travel
The Mermaid (Nhu Y) Restaurant in Hoi An
Party in the family village 2002