Lunch in a market in Hue

(Sorry to say I have been unable to get on the net much as I am right now in Bangkok Thailand and have had no internet access until we figured out a way to use our internet stick from Vietnam.) 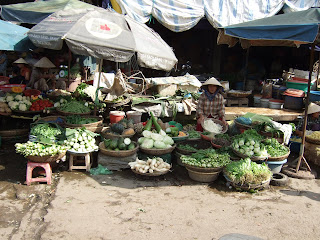 We stopped in a small local market to have a bite to eat as we were hungry and wanted some local eats at a good cost. I love market food, probably risky but worth it to have the taste. 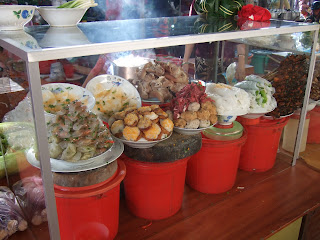 As you can see the food is mostly precooked and sits in the display case until bought; not the safest way to keep food but it works. 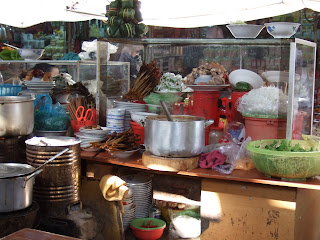 The meal prep area was primitive but the owner was able to present very tasty cheap food.

The first thing we had an appetizer plate with Nem (raw preserved meat), barbecued pork and salad rolls. I did not eat the Nem as I do not like most that I have eaten but I did enjoy the pork as it was tender and nicely spiced. The rolls were 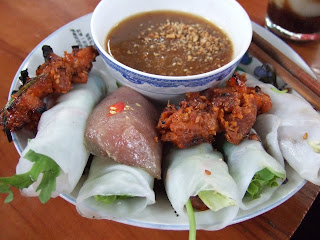 the real treat as there were not wrapped in the usual re-hydrated rice wrapper rather the wrap was a freshly cooked. The wrap was soft and gave a contrast to the crunchy contents. The dip was a variation of a peanut based sauce.
I had a bowl of Bun Bo Hue (the only soup the place made) which was tasty but not what I would recognize as Bun Bo Hue. The broth was not as strong or as hot as I expected. The owner may have altered the soup as she thought I could not eat it if it was Hue hot. I loved t 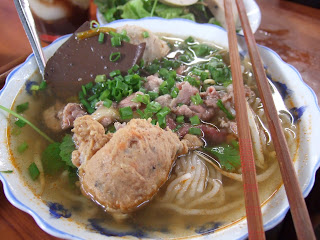 he meat balls as they had a rustic texture and were very tasty. The blood was kind of plain but properly cooked; I would have liked a little salt added to the blood as it was cooked.
Filed Under: Food travel
KHÔNG GIAN XƯA restaurant, part II
Little street snack in Hue