The Mermaid (Nhu Y) Restaurant in Hoi An

Well on to Hoi An, after a search of the internet I found some good recommendations for a resturant in the old part of town called the Mermaid. Here is a review on the New York times travel site  and their own site Hoi An …

KHÔNG GIAN XƯA restaurant, we had to go back and over eat again

We were so impressed with the food at KHÔNG GIAN XƯA restaurant we had to go back to try more of their food. I can not impress upon other enough that this restaurant is worth finding and eating at if you are anywhere near Hue. …

Update: Back in Vietnam, in a Village west of Hanoi again. We had a good time in Thailand but I am glad to be back as Bangkok was so busy. We shopped till we dropped several times over the ten days we were there and I am happy to be back in the slower pace of Vietnam.
The second restaurant we went to in Hue was one of the many tourist restaurants in the the city that have a menu that includes some of the local Hue specialties. I was surprised that they made food as well as they did as they looked more set-up for making non-Vietnamese dishes for the tourists.
We started with a plate of salad rolls made with a fresh rice flour wrap, tasty with a nice texture provided by the fresh rice wrapper. 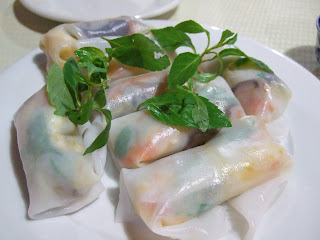 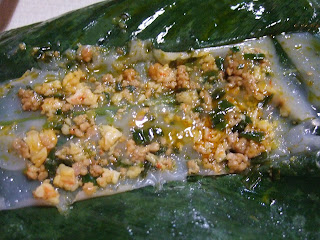 This was followed by a banana wrapped rice flour roll with ground pork and spices. It was very tasty but so think you had to scrape the mixture off the leaf; would have been better with more filling. And yes I did eat every bit of it as it was quite good.The cook should be proud of the taste if not the portion size.
We then had two squid based dishes, one with deep fried rice noodles and one stir fried with vegetables. The one with noodles had and interesting texture but the one with vegetables tasted better. It would have been better if the stir fry had been placed on top of the noodles. 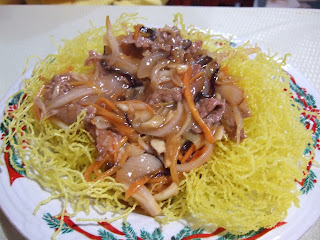 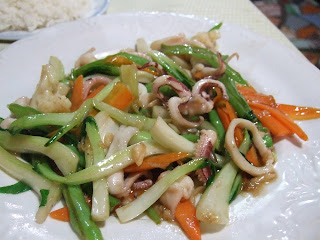 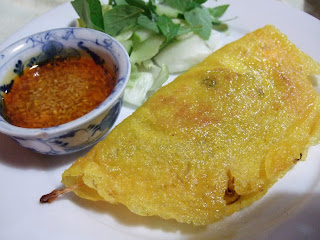 We next had a Vietnamese pancake much like what we have in the restaurant, the major difference was that it was not made with coconut milk which made their version not very tasty. It was very crunchy but lacked  richness that the coconut lends to the dish. The sauce was different than what we use at the restaurant it was not based on fish sauce rather it had a sesame seed flavour with garlic; not quite as nice as ours.
The next couple of dishes were not so great so I will just say that the deep fried egg plant was horrible and the Bo la lot had a grainy hard texture to the meat. Sorry to say there was nothing to learn from these two dishes so I will leave out the pictures.
Food travel

We were were walking around Hue and we were approached by a older woman selling small dumplings. I wanted to taste them as they looked so good so we bought a small bag. The vendor put the dumplings in a bag and covered with herbs …

Lunch in a market in Hue

(Sorry to say I have been unable to get on the net much as I am right now in Bangkok Thailand and have had no internet access until we figured out a way to use our internet stick from Vietnam.) We stopped in a small …