It has been almost three years since I have tasted street vendor food in Vietnam and it has been way too long for me. Street food is always something tourists are told to stay away from when traveling but I have learned that the taste is worth some discomfort. I have had my A & B hep shots and a course of stuff to stop me getting sick so I feel a bit more confident in eating on the street.

The first place we tried was a small street vendor that sold mainly chicken pho; 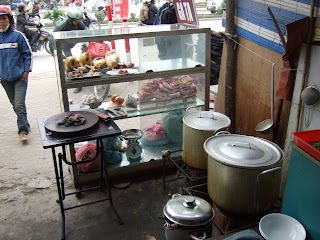 it was recommended to us by the taxi driver after we told him we wanted to eat street food. The place was just a small tarp covered spot next to the main street. The place had a couple pots and a glass display case with the pre-cooked meats. Of course there was no refrigeration for the meat and I knew that the meat would have been cooked hours ago. It was typical of most of the very small places in that it did one or two things such as pho very well but that the menu was just one or two items. The seating and tables were the typical Vietnamese small size (we would use them for children to sit at) that I can not sit at as the seat will break; the owner gave me their one large chair to sit with so I could at least be able to eat. 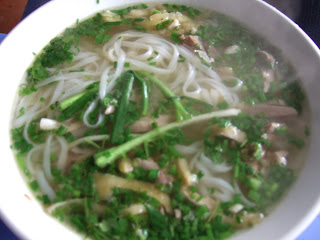 My wife had the chicken pho which is pictured left .

I had the beef pho which was basically chicken pho with cooked beef added rather than chicken. It

was delicious but not what we would think of as pho as it was not spiced the same way. The beef I had was tender with a bit of a grisly crunch. The soup of course was a chicken broth but with the beef it took on a bit of the beef flavour. I eat every drop of this soup and loved it. A great reintroduction to the great taste of Hanoi street food. 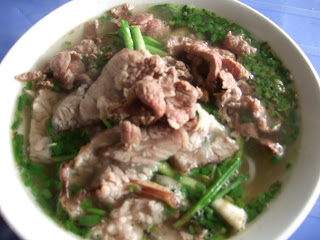 The beef pho is pictured to the right, the picture is a bit blurry as I must have been to eager to taste the soup. Oh well the taste was worth it.

The owner was very happy to have me as a customer and asked my wife why I came to her restaurant. It was explained that I love street food and crave the real flavors that can be found in the small places in Vietnam.

Filed Under: Food travel
The start of our journey
We have found our Hue (pronounced way)