The start of our journey

Arrived in Hanoi and made our way out to the village The village was near. Son Tay about 35 kilometers west of Hanoi. The trip was an adventure as it was all back road travel weaving in and out of traffic and taking the chaotic route in stride as our driver was certainly careful as he had a new vehicle.

Had a simple but wonderful meal of beef stir fry and ginger chicken. The really interesting and tasty treat was a noodle I encountered last time I was in the village in 2006. It was a thin rice noodle that had been allowed to slightly ferment. It was stuck together in bundles and served cut into smaller pieces. The taste was a touch sour with a bit of effervescence from the fermentation. It made the noodles seem alive and the plain rice noodle was raised in its taste profile from a bland noodle to a tangy treat that danced on the tongue.

I kept taking pieces of the noodle and just savoring the unique experience that would most probably be against the health board rules back in Vancouver.

Barbequed pork of my dreams

Also had some great barbecued pork roasted over a open fire and so delicious and crispy. 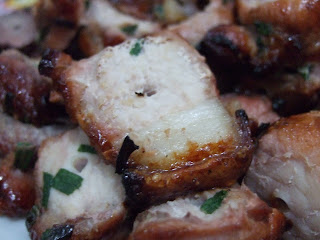 The pork is normally put on skewers with pork fat between the pieces of meat but I asked for it to be made lean. It tastes better with the fat but I look better without all the fat :). The pork is marinated for about 30 minutes then cooked over a small fire.

After it is cooked it is either straight into the mouth or dipped into a little fish sauce. 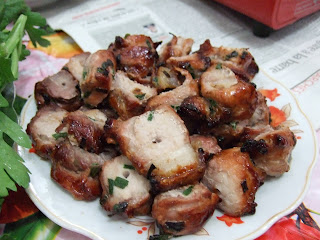 We don’t need any stinking alarm clock, or how I wanted to stuff a rooster in a speaker!

Night in the village is relatively quiet with an occasional bike puttering by the house
.
Morning comes early in the village, very early, way too early. Around 3:00 am the roosters think it is time to wake up and they make sure you join them. One starts then it spreads across the village. The house rings with the piercing call of the rooster doing what roosters seem to do the best; wake me up. As they stop and you finally start to begin to enter dream land the church bell starts ringing and as luck goes I am just a couple of properties away from the church. The church has a very good bell that wakes you with the strength of its peals to get ready for church.

Again you wait for the bells to stop as they do but wait they let you start to drift off again just to have a couple of more rings to remind you that you should be going to church and not back to sleep. As I have been a visitor to the village a few times I know to just wait for the next reason not to go back to sleep.

At 5:00 am the local announcements start broadcasting across the village from speakers on poles set up around the village. I ask what the announcement was about and was told it was starting with morning exercises… all the exercise I wanted to do at this time was to take our friendly neighborhood rooster and stuff him in the nearest speaker. I focused on the rooster as he kept speaking up as each new interruption to my sleep occurred.

The speakers blasted out music and local announcements for awhile just long enough for me to think I could fall asleep with the music as background noise. But no, I had forgotten the family geese that decided they needed to greet the day with their honking; as they were just living outside our bedroom window they were loud. I think at the time I gave stuffing the geese in with the rooster serious thought until I remembered I was just too tired. I finally did fall back to sleep as the world outside quieted down and decided to get on with their day.